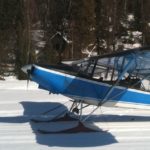 Last time we talked, it was confirmed that we fly a lot and significantly more
than our friends around the world. I wonder why that is… Let’s consider some
options and see if I get it right.

My first idea is that we fly because we want to get somewhere the road
doesn’t go. I’d been in Alaska less than a week when I found a road to a lake while
staking out some property. This past summer, a young friend spent many fun hours
flying materials to a remote site for his cabin. Then there are the years spent building
and visiting that cabin. That is a mighty good reason to fly. None of us would
continue flying lessons initially if it wasn’t fun, exciting and perhaps something to
brag about. However, when the expense of it is counted, it’s time for some
reflection. Is the ambition to turn the lessons into an income? Perhaps a time or
money saving plan? I’m aware of an auto dealer who commutes between Alaska and
the East coast to manage his business. One of the major problems with mineral
extraction in Alaska is the distance to market. Fortunately, some forms of gold are
not like iron ore or coal. In our history, prospectors and fur buyers often used
airplanes to get to the great stuff. Everybody’s read the sign, “Walk a Week or Fly an
Hour.”

Flying commercially has many rewards. I recall a real sense of satisfaction
delivering mail to remote villages ages ago. Those were the days before electronic
nav aids on the ground and on-board GPS. Our reliability was not nearly as good as
today and that’s perhaps the reason we were so welcome. Even as part of the jet
age, repeat passengers make your efforts appreciated. Today the money is better
than ever before. Unless you’re planning on repeated marriages, millionaire status is
a given.

Maybe you fit the “sportsman” description for hunting and fishing. Ego is hard
to deal with in ourselves. Blindness is an attribute here. Why else would we spend
thousands to get airborne 10′ sooner or to land where none has landed before to
bag that trophy moose, after 24 hours of course. Many of us fly as part of a guiding
or outfitting operation. I remember the day, 9/11 when clients were marooned for
days without knowledge of why or when they might be rescued. A lot less meat was
taken out that year. Many flights were done literally under the radar to get people
home. I happened to be on the Deshka river by boat when both planes flew over
below tree top level.

Drones have been edging into our flying environment since the 1960’s. Call me
slow, but I just learned that in the SR-71 days, a few drones were launched above
80,000 ft. to fly at Mach 3 with cameras rolling to look over China. So, if high speed
and defense is your thing then the military is a good choice for you. I also recently
learned a lesson from a new friend at Mach 2 that applies to all of us. He was in an F15 approaching hostel airspace when he lost control of his fighter. The controls
locked up heading to enemy territory. The control stick would not move. At almost
twice the speed to eject safely, he radioed his dilemma to base. Base got a hold of a
system design engineer halfway around the world who answered the phone at 2 AM
and solved the problem. He landed with 6 min. of fuel remaining. Upon inspection
the problem was determined to have been caused by two frayed wires touching each
other. Surviving such a career certainly puts you in line for a better paying flying job.

Recently I’ve run across some flying folk who have been there and done that
who really like sharing their experiences with high school kids. The scene looks like
this: There’s a shop environment with extravagant new tools. A program where over
a couple years the kids got to put together a kit RV-12. They learn building
techniques, tool use, determination, problem solving and get glimpses into a possible
future in aviation. The mentors share construction techniques, tool use ideas etc. but
mostly listen to kids that relate to their dreams and fantasies about life. Sometimes
they get to share some wisdom that just might help some youngsters to a fulfilling
career. There is a teacher that comes to mind, a “saint” who keeps it all together
with just the right pressure on the kids and the right encouragement with the
mentors and a step ahead of the program to keep it all moving along. Some sage
once said that mankind has wanted to fly for centuries, envious of the birds.

Decades ago, there were balloon flights defying gravity and gliders pulled
down hills by gravity. Then finally the Wrights figured out how to control direction
and with the help of Mr. Taylor’s engine stayed airborne long enough to make a 180
and return to their starting point. That to me was the beginning of aviation. From
that sweet day in Ohio to today, we have been refining the propulsion, and the lift
while reducing the drag and weight of the flying machine. An ancient writer said no
one knows where the wind blows to or from, but today we do! Even in my 60+ year
old cruiser I have an air data machine that gives a constant read out of the wind
speed and direction. I can compare this to a weather analysis chart on my iPad and
see almost exactly in real time where that wind came from and where it’s headed. In
another “bird” I can push and pull, experience weightlessness and quintuple my
weight. After 5 g’s it goes dark for me, I’m unsure about what happens, but in the
meantime the natural information about our airborne world is wonderful to try and
understand. I don’t expect to be an astronaut but the extraterrestrial experience of
manned flight with all the related intricacies of propulsion, drag, lift and weight will
keep me occupied for years to come.