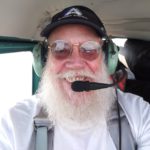 Happy New Year! (US & Canada), З Новим роком! (Ukrainian); С Новым Годом! (Russian); あけまし
て おめでとう ございます! (Japanese); Bonne année! (French); Frohes neues Jahr! (German);
Gelukkig nieuwjaar! (Belgian); 新年快乐! (Mandarin). No matter where you live, or how and when
you say it, it’s time to preserve the best of our 2022 memories, haul the rest of 2022 off to the
incinerator, and begin building a fresh new year of memories and experiences in 2023!
Frequently in 2022 I found myself wondering if I could now cash in on my Dad’s childhood
threat to smack me into next year. But I made it here without requiring such drastic measures!
I wish each of our members and my friends around the world a safe, healthy, prosperous, and
peaceful new year – the metaphorical “blue skies and tail winds!”

Please Continue to Support Your Association in 2023:
I ask each of you to please renew your membership when it’s time, and to continue helping our
collective ongoing mission to preserve, protect, and promote general aviation in Alaska. Here
are some additional suggestions to consider:

AK2RU:
As our US/Russia Liaison, I plan to continue my volunteer work in 2023 to promote general aviation between Alaska and Russia. Unfortunately, it does not look like we will be doing a group AK2RU VFR flight again this year. However, I am keeping the lines of communication open on the other side of the Bering Sea so that we do not have to reinvent the wheel when we are able to resume our annual group flights. It is important to note that, when our members do these flights from Alaska to Russia (AK2RU), the purpose is to go as general aviation goodwill ambassadors from Alaska, with absolutely no political agenda. And everyone does it at their own expense. The Alaska Airmen’s Association has a good reputation, and our members have been warmly welcomed by the Russian Air Traffic Controllers, Customs & Border Authorities, local government officials, and the civilian population without exception wherever we have visited.
How are these flights valuable to Alaskan general aviation?

The Great Alaska Aviation Gathering:
Anchorage whetted its appetite for an annual GA air show when the Wings Over Alaska Air Show began at Merrill Field in the early 1980’s. If memory serves me correctly, that show ran from 1980 through 1982 with Alaska Airmen’s Association involvement. At the same time, The Elmendorf AFB Open House and Air Show was, and continues to be, a huge biennial airshow enthusiastically embraced by the residents of Southcentral Alaska. It is oriented more to military aviation and recruiting but has always been open to the public and features some GA demonstrations too. Numerous other regional fly-ins have been occurring for years which have included STOL competitions, pumpkin drops or flour bombing competitions, and just plain old informal aviation camaraderie. Many of these events continue today, from Seldovia, to Skwentna, to Bettles, to Valdez, and other on and off-airport locations.
But the Alaska Airmen’s Association began The Great Alaska Aviation Gathering at Ted Stevens Anchorage International Airport (PANC) in 1998. This event, traditionally held the first weekend in May at The FedEx Maintenance Hangar and surrounding ramps, grew to become the largest aviation trade show in the country that had free admission, free parking, and free shuttle bus service. Attendance at the 2-day event, generously sponsored each year by FedEx Express, Alaska Airlines, UPS, Textron Aviation, and others attracted from 25,000 to 30,000 attendees each year as it matured. The last year the Gathering was held at the FedEx Express Maintenance Hangar was 2019. There was no Great Alaska Aviation Gathering in 2020 due to public health restrictions related to the COVID Pandemic.
It looked like there would also be no 2021 Gathering, as public health restrictions continued to be imposed in Anchorage. And it was common knowledge that no other airfield existed in Alaska that had enough space to accommodate a show of this size. The problem with common knowledge is that it might always be common, but it’s not always correct! Guided by the vision and leadership of our Executive Director Abby Austin, and with the support of our Board of Directors, the association did put on a Gathering in 2021; moving the show up to Palmer for the first time ever! The city of Palmer had far fewer Covid restrictions, and actively supported the show; which was held both at the Palmer airport (PAAQ) and the state fairgrounds. Admission remained free, and the free parking at the fairgrounds was in much closer proximity to the events. A regular free shuttle bus ran between the two venues, and attendance was nearly the same as prior events in Anchorage. Abby did an amazing job organizing a successful show by thinking outside the box, and working around obstacles instead of being blocked by them. My friend Jessica Cox, the only person ever licensed to fly an airplane without arms, would be proud of her. I hope to get Jessica back up to participate in the Gathering again sometime, although it would be a long flight from Arizona to Alaska in her Ercoupe! The following year, 2022, the Gathering was again held in Palmer, and Abby led a team that made the 2nd Palmer Gathering even bigger and better than the first one was.
As we now begin 2023, her team is already very busy organizing the upcoming Gathering, which will again be in Palmer. Having use of PAAQ has allowed for aerial demonstrations, and fly-in camping, among other opportunities that were never available at PANC. Installing a 60’ gate to
replace the 20’ gate has also made it much safer and easier for fairgrounds static display aircraft to transition from the parking lot runway into the fairgrounds. We no longer have the short runway inside the fairgrounds fence that we created in 2021, because a roller coaster has been installed at that location. But this year’s Gathering looks to be the biggest and best yet. Abby has shown us just another excellent example of how your association has continued to thrive, even at those times when the odds seem to have been stacked against us, since 1951!
And, as many of you know, I retired last year after 8 years of being the Gathering’s volunteer Ramp Boss. I’m looking forward to attending the 25th annual Great Alaska Aviation Gathering this year as a spectator with no responsibilities and hope to see you there too. If you see me wandering around looking lost and disoriented, just hand me a clipboard and a radio and I’ll feel right at home again even with no responsibilities. Have a safe and happy 2023, my friends!

John Dahlen is an Alaska Airmen’s Association life member, the association’s volunteer US/Russia Liaison, past Vice President, past Ramp Boss, and has been known to play Santa Claus for special events occasionally. He always welcomes correspondence and other interactions with members and is available as a free-loading hitchhiker for flights to/from fly-ins or other events in 2023! If you have suggestions for future articles, he can be reached at OneAlaskanGuy@hotmail.com or by phone/text at (907) 830-5889.